This is probably by far my favourite picture that describes git commit messages in a nutshell. It sums up most of our experience using and seeing git commits by ourselves or with our team. Of course, credit where credit's due

It's pretty common to stumble upon these kinds of commit messages in the wild or with your team, especially if they're not accustomed to using git with a team or other developers, or just git itself.

Before reading, I expect you to at least know what Git is and its common terminology such as pull, push, commit, merge, etc. I won't be explaining the basics here since you can learn that by yourself.

Why you should know and use this

Documentation for anything in your life is in my opinion one of the most crucial things to (at least) do, and if you do it right, it could be your best strong suit. Git commit, is one of your most powerful and convenient tool to document your codebase.

Did at least one of these crossed your mind at some point?

What happens when there's a spaghetti code with minimal descriptive messages between commits, where would we know where to look first or where to learn. I can't barely remember what I wrote half a year ago if it weren't for the commits and documentation I made ahead of time. I'm sure we have better things to do to aside from remembering what we wrote for eternity.

Of course, other than to help us remember what we wrote, it also helps other developers and maintainers to find and fix the same issue we use to have. We could even revert to a working state in the past if it all breaks down, isn't that cool!

How a good commit message is supposed to be

Perhaps the explanation beforehand was a little bit too vague, here's a solid and concrete example of what I meant. I present to you in my honest opinion by far the best commit message 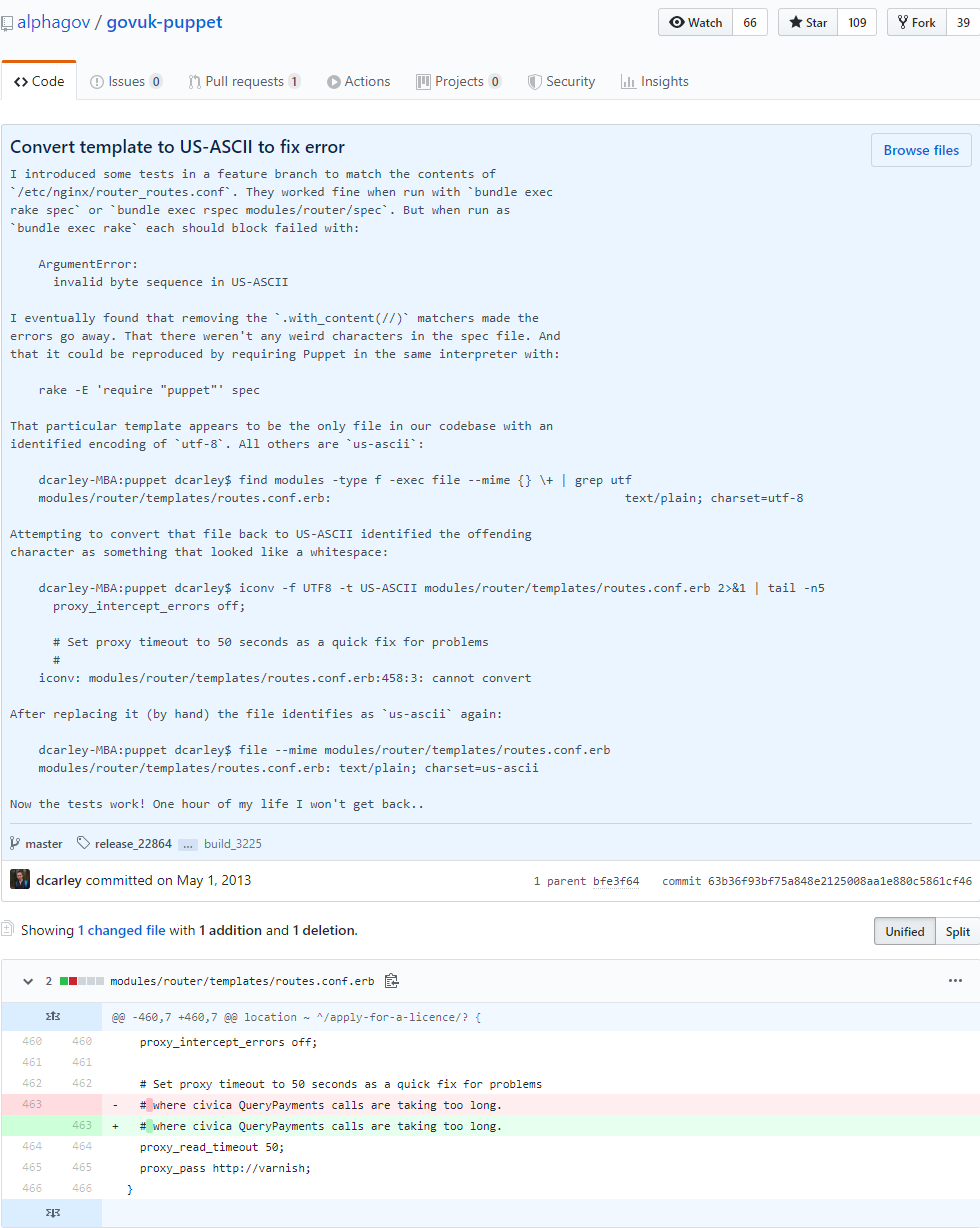 This commit message could have been easily written as fix bug, add whitespace, or change comments. Instead, Dan Carley, author of this commit, took his time to explain and document his commit for the benefit of the people working with him.

Why this is IMHO the best commit message

It goes into detail about what the problem is, the process of debugging and fixing it, and the last line reminds us that there's another human being behind every commit. We can feel Dan's frustration and his satisfaction after finally solving it.

It takes practice and full consciousness to write good and descriptive messages. This might be an extreme example for just a whitespace and I wouldn't expect all commits should be like this Especially not like this C commit message

How do we properly write our commits

See example above where the top commit has 3 dots, it could be expanded as shown below

And when we click on it, it'll show its description by default rather than just one line of message 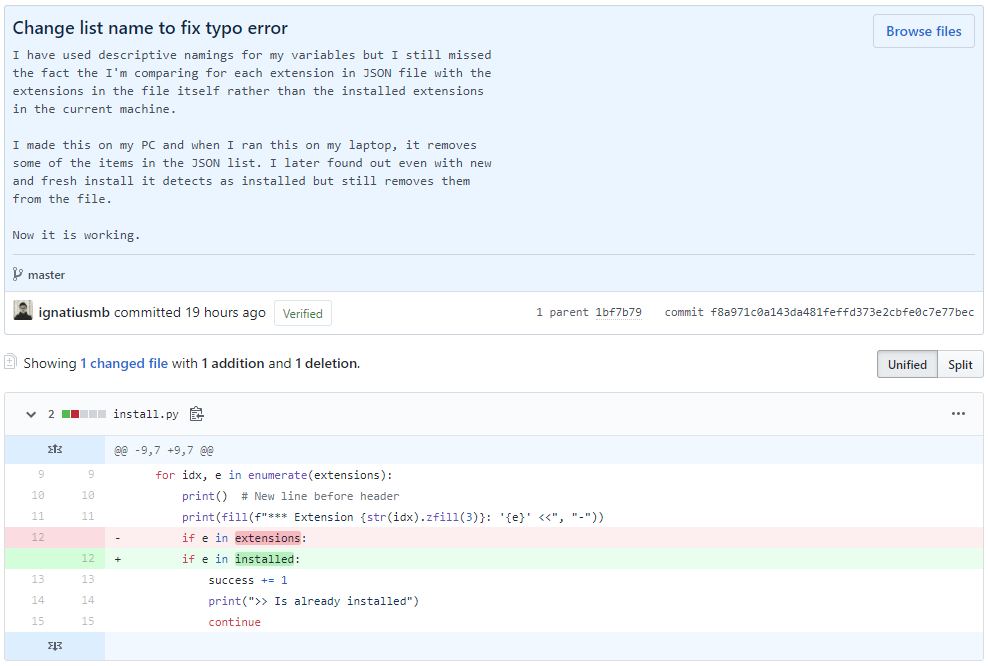 A diff will tell you what changed, but only the commit message can properly tell you why. -Chris

VS Code for editing your commit messages

There's a lot of text editors that could integrate seamlessly with Git, but the one I use is VS Code and it's chosen when Git is installed 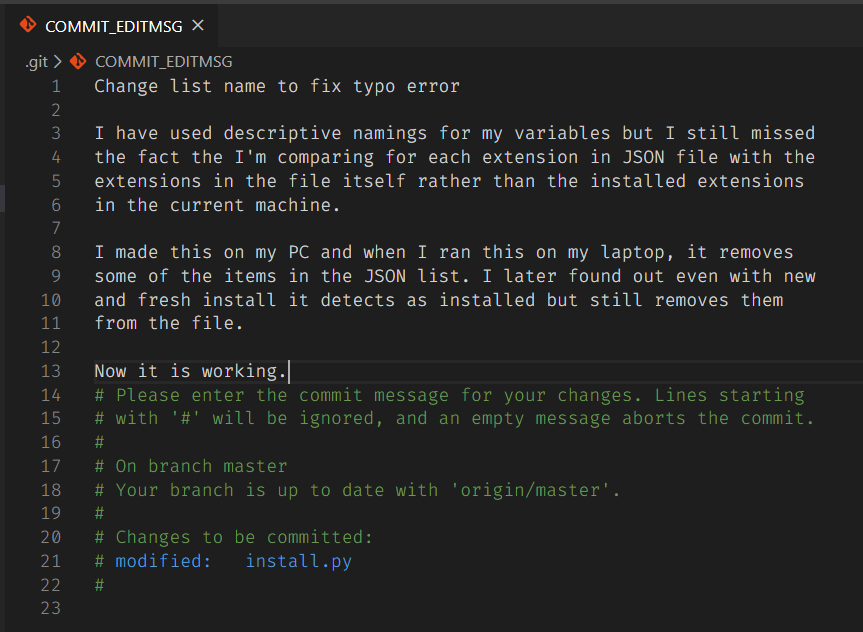 Writing good commits is one thing, cluttering your default (usually production) branch is another thing, and good commits isn't enough for your repo's maintainability.

Imagine pushing all of this directly into the default branch with all the conflicts and issues, pipeline failing, and so on. With this Merge Request (MR) opened, all of this cluttered commits can be squashed and it will just display its title as one commit, which is [PBI-2] Menambahkan fitur untuk menampilkan informasi lbh 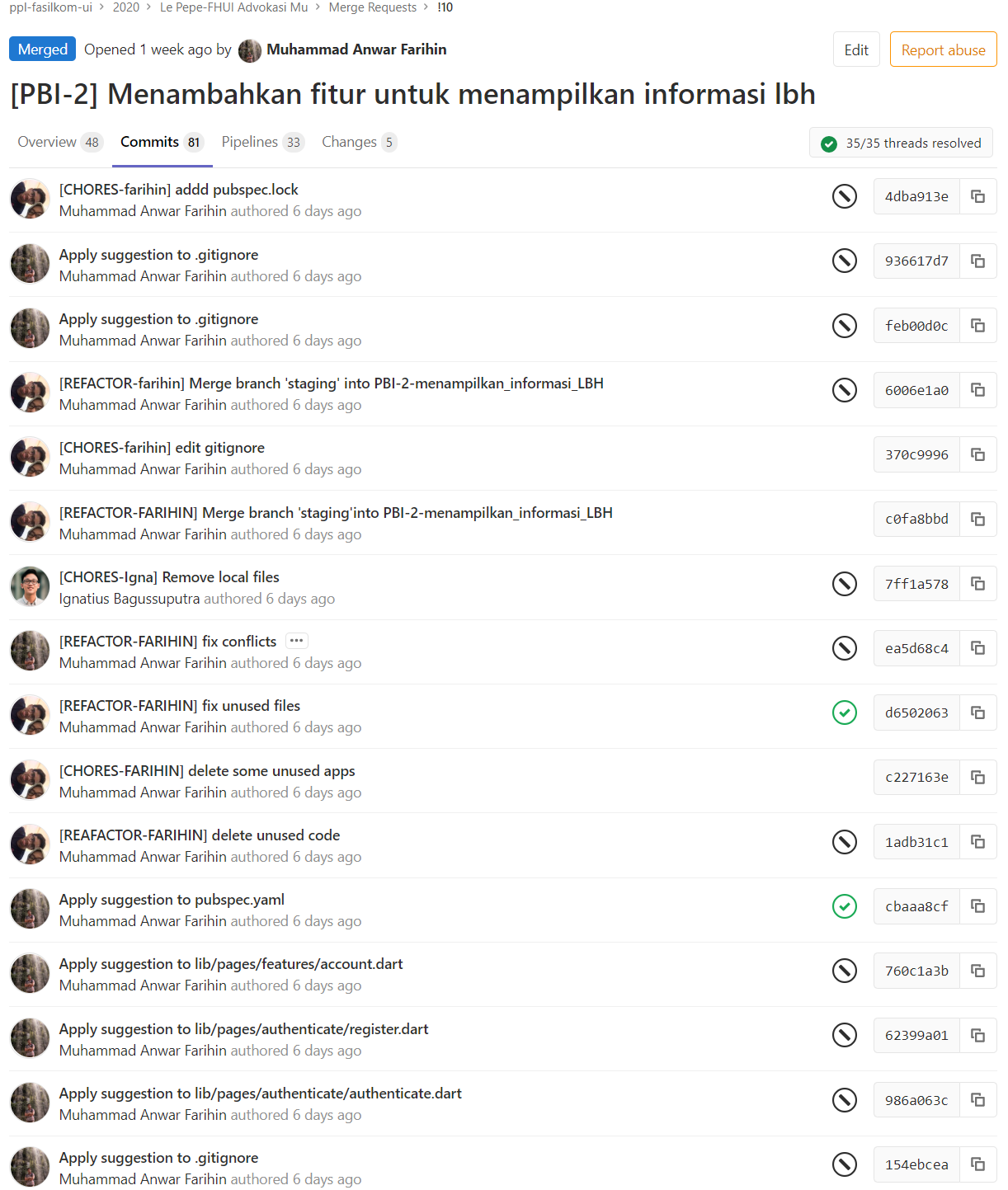 By applying a strict and consistent git flow, you could limit the errors occuring in production build and prevent any issues and conflicts before they're merged to your default branch. Here are some of the advantages:

Here are some tips on how to strictly and properly apply this technique, note that this will work optimally if applied to a developer team and not individuals:

Write good commits and keep your repository maintainable, the future maintainer that thanks you may be yourself!